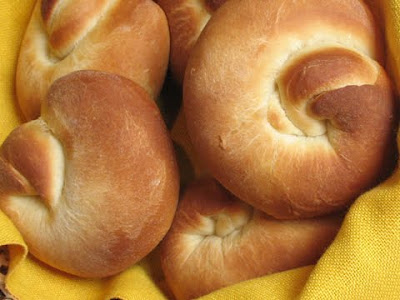 Poor BBD is not getting much attention these days. Fortunately the dog himself still gets lots of attention, walks, rubs, and loving, plus at least a taste of any bread baked. 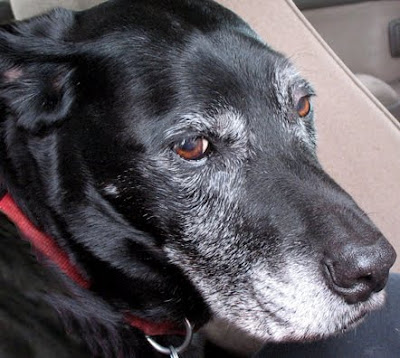 The Bread Baking Babes all bake the same recipe once a month and this month Karen of Bake My Day has come up with a winner. Sweetie, Straight Shooter and I just had a lunch of freshly made minestrone soup and hot from the oven Ensaimadas rolls and they were gone in a flash.

Light, tender, buttery and almost like croissants without the repeated rolling and folding and butter block that they require, these rolls will likely become the recipe I turn to when I want dinner rolls. 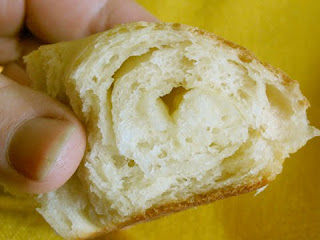 Part of the fun for me was that I made good use of the lovely scale I was given for Christmas. Once the mixing bowl was weighed, I zeroed out the weight, added the flour, zeroed again, added the sugar and was ready to go on with the recipe with nothing extra to wash, plus it was fast! I used the scale again when I was dividing the dough into balls. That way each roll was almost the exact weight as the others. 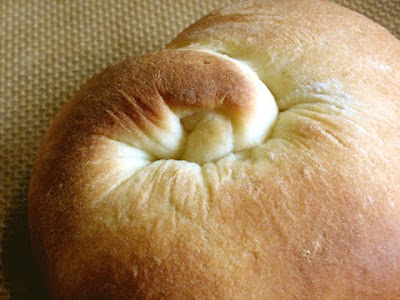 Not only are these Ensaimadas delicious but they are pretty to look at, too, being sort of snail shaped. 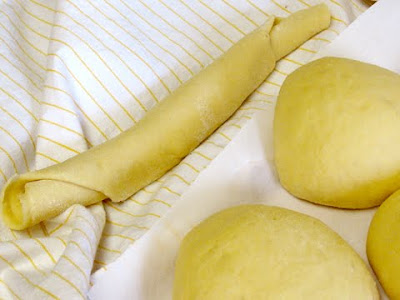 The rolling of each piece of dough into a very thin circle took the lion's share of the work needed to make these. The dough itself was quick and easy. You do need to allow some rising time as with all yeasted breads, but since they are rolls, it is less than with most loaves of bread.

For fun I made half of the rolls (5) exactly as called for in the recipe and then I dolled up the other half. Two have raspberry jam spread lightly over the butter before rolling up. 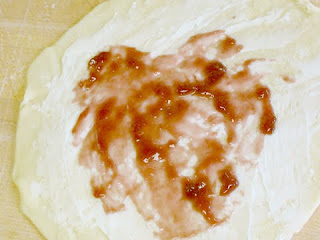 The other three have cinnamon sugar sprinkled over the butter.

This post will be entered in this weeks Yeastspotting, found at Susan's Wild Yeast blog, and also in Bread Baking Day #27 - Latin Breads, hosted by Gretchen of Canela and Comino, because this bread, originally from Spain, can be found in countries south of the U.S. border, too. Check out the events and also the Bread Baking Babes renditions of these delicate and delicious rolls. Links for the other Babes can be found at Karen and Gretchen's blogs.

Ensaimadas
from Nicole at Delicious Days blog
(yields about 10 Ensaimadas):

Add the flour together with sugar and salt into a large bowl (I used my KitchenAid bowl) and mix well. Make a hollow in the center, add the crumbled yeast (I used active dry yeast) and pour over just enough of the lukewarm milk until the yeast is covered. Stir the yeast milk once or twice, then cover the bowl with a kitchen towel and let rest for about 15 minutes or until the surface of the yeast milk looks bubbly. 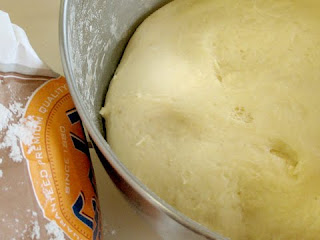 Add the other ingredients (the remaining milk, eggs,olive oil ) and knead well, either by hand or with your kitchen machine until the dough comes together nicely. I used less milk in the beginning (200 or 220 ml, while the original recipe suggests 250 ml) and my dough still turned out pretty sticky, I therefor added a tad more flour and let it knead at medium speed for 3 minutes (just for the record: my dough still felt sticky). Let the covered bowl rest again in a warm place for at least 30 minutes or until the dough has doubled. 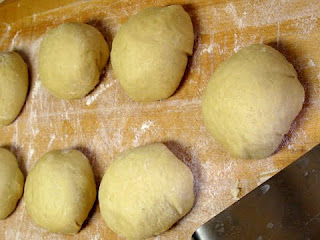 Punch it down softly, then flip the dough onto a well-floured surface and sprinkle with flour. Cut into about 10 equally sized portions and form into neat little balls, before letting them rest – sprinkled with flour, covered with a kitchen towel – once more for at least 30 minutes. 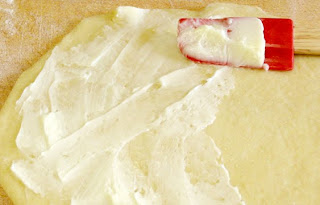 Shaping the Ensaimadas: Flatten one doughball, then roll out with a rolling pin (use flour as needed) until you get a pretty thin dough circle and brush it generously with the softened pork lard (I used soft butter).

Roll up cautiously, then let rest for a couple of minutes and continue with the other dough balls. (Meanwhile line the baking sheets with either parchment paper or silicone mats.) 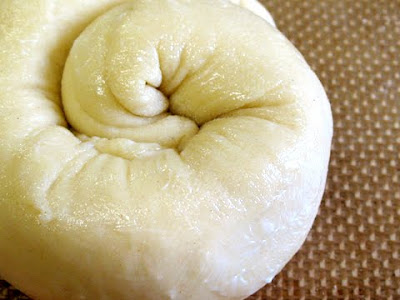 Coil up each dough piece until it resembles the house of a snail (tuck the outer end under), ideally very loosely, because any spaces will fill up as the dough rises further. Place about five Ensaimadas on one baking sheet, making sure to leave enough space between them. Lightly brush with lard and cover up again.

The final rise is supposed to last overnight, yet I baked mine in three different batches (with rising times of 1 hour, 4 hours, 13 hours) and we preferred their look and taste with shorter rising times (1 and 4 hours). But do as you like. (I baked mine at 2 and three hours and they were wonderful!)

Preheat the oven to 200°C (~390° Fahrenheit) and bake for 14 to 16 minutes or until golden brown. Take out and let them cool down on a wire rack for a couple of minutes, then generously dust with powdered sugar and enjoy while still warm. (I left off the powdered sugar for the ones we ate with the soup. They are not terribly sweet without it and went well with the soup.)
Posted by Elle at 4:01 PM