Pancakes Are Bread, Too 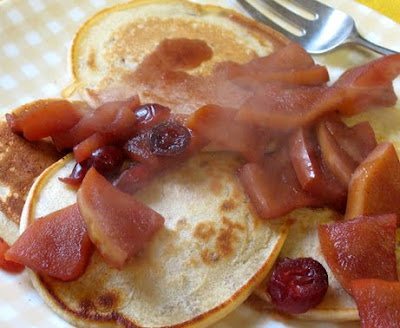 You should have seen Xam this past weekend. He sat just outside of the kitchen, patiently waiting as I cooked the pancakes on the griddle, trying on his big brown eyed 'feed me' look. Sweetie got the first plate of pancakes, liberally garnished with a lovely apple-pomegranate-cranberry-cinnamon compote. Xam looked even more anxious. Then I managed to scorch two of the pancakes at the back of the grill...the heat on that burner was too high. Lucky dog! Once they were cooled a bit he was the recipient of some slightly burnt but good bread...pancakes, but still bread. 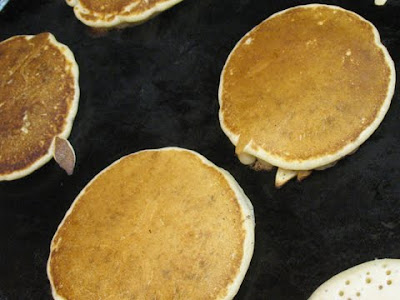 A few days before I made these sourdough pancakes I took the ‘toss off’ from feeding the starter and put in a bowl and added a slurry of a cup of flour and 3/4 cup of water, whisked together. Once those were whisked together I let it sit out on the counter overnight to get some good yeast action going on, then put it in the fridge in the morning.

Because some of the preparation had already been done, the pancakes went together very quickly. I probably should have let the batter sit another hour before cooking them for fluffier pancakes, but we were hungry…so I poured the batter on the hot griddle very shortly after stirring in the last ingredients.

The first set of pancakes were fairly flat, but delicious even so. The next batch was fatter and the next batch were just like regular pancakes. I love the sour tang and tender texture, plus they seem to get a nice golden crust when I start with sourdough starter instead of packaged yeast. Molasses added depth, flax seed some texture, and buttermilk it’s own contribution of tang and tenderness. All in all these were excellent pancakes for a weekend morning…although they would taste fine any day of the week.

To gild the lily I made the fruit compote to go on top. Sliced Braeburn apples went into a saucepan with some POM Wonderful pomegranate juice, some dried cranberries (which became soft and gorgeous with the steaming), a shake or two of cinnamon, and a bit of sugar. I covered the pan and simmered it until the apples and cranberries were soft, then uncovered the pan and let the juices cook down a bit for a syrup. The pancakes were excellent but with the apple pomegranate cinnamon compote they were extraordinary!

I'm sending this over to Susan at Wild Yeast for the week's Yeastspotting event. Always a bread bakers fantasy land, so check it out!

Place the sourdough starter in a bowl at least twice as big in volume. In another bowl whisk together 1 cup of the flour and the ¾ cup water. Add it to the starter and whisk to combine. Leave, uncovered, in a cool place (60-65 degrees F) overnight. In the morning cover with plastic wrap and place in the fridge.

In the next day or two or three, remove the bowl with the starter mixture from the fridge and bring to room temperature. Then whisk in the egg, molasses, butter, buttermilk and milk.

In another bowl, whisk together the second cup of flour, the salt and the flax seed. Add this to the starter mixture, creating a batter about the consistency of heavy cream.

Let sit for half an hour if you have more patience than I do, or use right away. Heat a frying pan or griddle over medium high heat until a drop of water dropped on the surface sizzles. Add a light coating of oil or butter or margarine, then scoop about 1/3 cup of batter for each pancake onto the hot griddle.

Cook until small bubbles form around the edges, flip over and continue cooking until cooked through and golden brown. Serve while hot.

1 large Braeburn (or your favorite kind) apple, cored and sliced. Note: I like to leave the peel on apples but you can peel them if you prefer, then slice them
1 cup POM Wonderful pomegranate juice
2 tablespoons dried cranberries
1 tablespoon white or brown sugar
1/8 teaspoon ground cinnamon
dash of ground cloves if you like cloves

Place apple slices, pomegranate juice, sugar, cinnamon and cloves (if using) in a saucepan. Stir to combine. Place over medium heat. Cover and bring to a boil. Reduce heat to simmer and simmer for 10 minutes. Remove cover and continue simmering until sauce is the consistency you like. Serve warm or cold. Good over vanilla ice cream, too.
Posted by Elle at 11:00 AM