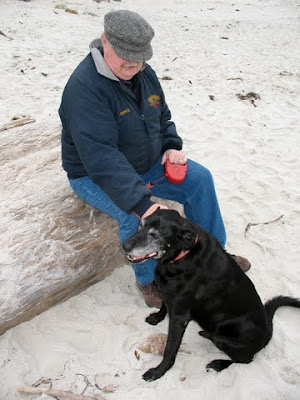 It takes time. I know that, of course. Still it took from mid-June when his time on earth was done until now- early October- for me to be able to write a post in honor of the bread baker's dog, Xam on what I think of as his blog.

He lived a long time for a big black lab...15 years in fact. He was in pretty good health until about Christmas time when we noticed he was having trouble breathing now and then. The vet confirmed that and said that a valve that regulates breathing had worn out. Over the next six months it grew gradually worse, although some of the time he still seemed like a young dog, especially when we took walks. Even that changed about March or April. The walks became shorter although he still loved to be out in nature.

I still bake bread, although I don't blog about it as much...most of the bread is just slight variations of ones I've posted before. When the house smells so good with the fragrance of warm bread I know that Xam is with us in spirit, tail wagging, ready for his taste of what is fresh out of the oven. I carry his enthusiasm for life and good food with me as a gift. Thank you Xam for all the good years.
Posted by Elle at 3:08 PM 4 comments: