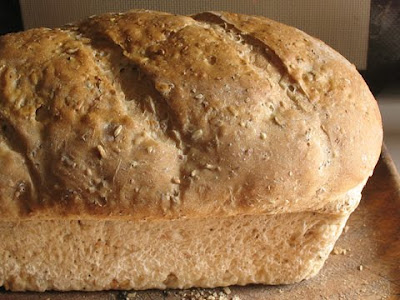 The first day of any new year in almost any place of business is bound to be a little...or a lot...crazy. Today was no exception. The office where I work had been closed since Thursday afternoon, so there was a backlog of e-mails to handle first thing in the morning. Many folks apparently had made some good new years resolutions to take care of things they had been putting off because we also received about four or five times the phone calls we usually receive on our busiest days and most were asking about the pain clinic, so the calls took some time to do right. Being able to offer hope to some chronic pain sufferers makes the job worthwhile, even when the phones just won't stop ringing.

The good news is that the day flew by. The other good news is that when I finally stopped for lunch a little after 1 pm, I had a sandwich waiting for me that was extra good because I'd used some bread that I baked for the new year...and it was really good bread. I've come to enjoy not only sourdough bread, but sourdough bread that has multiple grains and lots of seeds worked into the dough. The crust is crisp, the bread has a nice chewiness and the flavors are delightful!
This bread is no exception. I also put some extra dough in one of the balls, so the loaf really rose up high and spilled over the top. You can really make a nice sandwich with bread like this!
I didn't have a recipe for this although it is loosely based on the bread I've been making lately that has some egg, butter and milk, along with mixed flours. The key is to add the flour a little at a time toward the end so that the dough stays moist but isn't too sticky...a fine balance. I started by microwaving about a cup of a multi-grain cereal mix I found in the pantry. Flakes of oats, triticale, and rye were joined by wheat berries and barley. It made a delicious smelling cooked cereal and a hearty flavored loaf. I also used some barley flour and some King Arthur's 12 grain flour mix, so lots of good grains played together and with the yeast. The King Arthur Flour company also has a seed mix called Harvest mix and I kneaded some of that into the dough after the first rise.
As with most loaves, you can substitute packaged dry yeast which has been 'proofed' in some warm water for the sourdough starter and you will still have a great loaf of bread!
All Mixed Up Multi-Grain Loaf
1 cup mixed grains, cooked and cooled
1 cup sourdough starter, or 3/4 cup warm water (110 degrees F) with 1 package of dry yeast sprinkled over, and allowed to proof for 5 minutes
1 egg, slightly beaten
2 tablespoons butter, softened
1 cup milk at room temperature
1 cup barley flour
1 cup 12-grain flour or similar mixed grain flour
1 cup whole wheat flour
about 1-2 cups unbleached bread flour
1/2 cup mixed seeds, like King Arthur's Harvest Blend of seeds
In the bowl of a stand mixer combine the cooked and cooled grain cereal mixture, the sourdough starter or proofed yeast, the egg, butter and milk with a wooden spoon. Set aside.
In a large bowl whisk together the barley flour, 12-grain flour, wheat flour and 1 cup unbleached flour. Place a dough hook on the stand mixer. With the machine running on low, gradually add the flour mixture (plus the additional flour, if needed) until the dough comes together, climbs the dough hook, and cleans the sides of the bowl. Continue to run the mixer on slow to let the dough knead for another 5- 10 minutes, or until dough is smooth and silky.
Turn out onto a lightly floured surface and knead another minute to completely combine the ingredients. Gather dough into a ball and place in an oiled large bowl or other container large enough for the dough to rise in. Turn the dough over to oil the whole ball. Cover with a tea towel or plastic wrap and let rise in a draft free warm place until doubled in bulk, about 1 1/2 to 2 hours.
Punch down risen dough and turn out onto lightly floured surface. Using your fingers, push down on the dough to spread it into a rectangle roughly 10 by 13 inches. Sprinkle with about 1/3 of the seed mixture. Roll up jelly-roll fashion starting on one long side. Fold the two ends in, then push down on the dough with your fingers or fist to again spread the dough into a rectangle. Repeat the scattering of the seeds and rolling up of the dough and folding in of the sides. Repeat the whole thing one more time, using up the rest of the seed mixture. Knead dough a few minutes to make sure all the seeds are well distributed.
Divide dough into two pieces. Shape each into a loaf and put into loaf pans. Cover with a tea towel or plastic wrap and let rise in a draft free warm place until doubled in bulk, about 1- 1 1/2 hours. While dough is rising, preheat oven to 350 degrees F.
Gently slash tops of risen dough and (optional) brush tops with an egg wash (1 egg beaten with 2 tablespoons water). Place loaf pans into preheated oven and bake until golden brown. Loaf is done when loaf sounds hollow when tapped on the bottom after being turned out of the pan.
Let cool on a wire rack before slicing. Makes two loaves.
I'm sending this over to Susan at Wild Yeast for the Yeastspotting event this week. There is something very inspiring in checking out her post each week with all of the wonderful variations on the yeast theme. Do yourself a favor and go check it out!
Posted by Elle at 8:37 PM