I have a good friend who has encouraged my bread baking in many ways. Little did I know that she longed to learn to bake bread herself. One day I found that out and so we decided to devote the better part of a day so that I could teach her how to bake yeasted bread.

Baking two kinds of breads in one day requires a bit of organization, but we wanted to make dinner rolls and something sweet, so we got started at 10 am. First we made the wheat dough for the rolls and started it proofing. I'm rarely envious of things (as opposed to experiences) but I am envious of my friend's convection wall oven with a proofing setting...it worked so well and made life much easier since it was the perfect temperature for proofing the dough.

The recipe we used for the dinner rolls is the same one I made for my afternoon with Sparkle Plenty and Arcadia. The dough is very easy to work with, which made it perfect for teaching Miss G how to handle the dough for rolls. The knots are very easy to do and they had great oven spring, a wonderful brown crust, and were much better looking and tasting than any rolls I've made. Beginner's luck or a natural talent for baking...I think the latter. 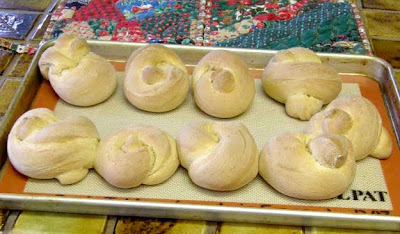 When we made the wheat dough I had Miss G note how the yeast looked when it had 'proofed' in barely warm water. Once the dough was kneaded by the stand mixer, I had her feel it and knead it lightly before it went into the rising bowl. Seeing and feeling the different parts of the process go a long way toward feeling comfortable enough to bake some bread on your own...at least I hope it works that way. This was my first time trying to teach how to make bread, so it remains to be seen how well I did.
Once the wheat dough was in the proofing oven, ready for its initial rise, we washed up, then began the sweet dough for a large and impressive braid, full of dried cranberries and orange zest and walnuts. I've made this bread before, so I knew that it would be both easy and a knock out!
This time the dry yeast was combined with the dry ingredients and not rehydrated first in water. This dough goes together really easily and smells so good with that pungent orange zest! By the time it was ready for its first rise, the wheat dough had doubled in size and was ready to shape. We used a lightly oiled bowl and plastic wrap covering for each kind of dough for the initial rise.
Once the wheat dough was punched down, Miss G pulled it out of the bowl and on to a lightly flour marble slab. We used a bench scraper to divide the dough into 9 pieces. I told her that if you needed exactly the same amount of dough in each that you could always weight the pieces to make sure, but we decided to eyeball the divisions. Shaping each piece into a rope took a little time. Making the knot also took some practice, but soon we had nine lovely knots. We covered them with a towel and let them double in size while we had a well-earned lunch.
After lunch the rolls were ready to bake. As noted above, they baked up into gorgeous and delicious rolls. While they were baking we took the sweet dough out of the proofing oven, punched it down (Miss G was getting good at that, too) and divided it into thirds with the bench scraper. 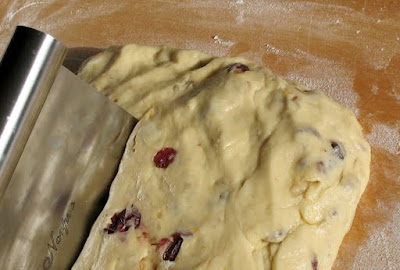 Each third was shaped into a long rope. I found that squeezing the dough in the middle got the rope started forming and then it was like working with play-doh. 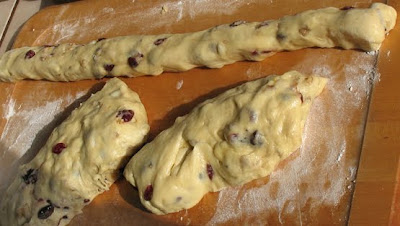 Once the ropes were made, with one slightly longer than the other two, they were moved to a silicon mat lined baking sheet where we braided then just as you would plait hair. Now the towel was placed on over the braid and it was set aside to double in size.
By now the rolls were done and the kitchen smell all nice and yeasty and of freshly baked bread! We brewed up some tea and shared one after it had cooled slightly. It was great with some butter but even better with a bit of bitter orange marmalade! When Miss G's hubby came home he enjoyed a fresh roll, too.
The braid had doubled in bulk by then, so we glazed it with beaten egg, 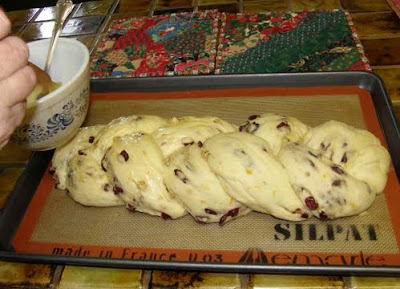 sprinkled on some sugar and put it in the oven. 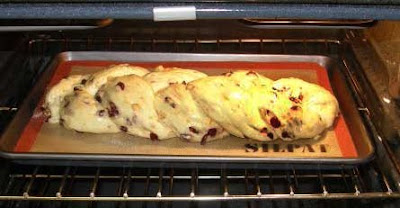 The braid baked while we cleaned up. It, too had wonderful oven spring and it was so large that it stretched the length of a half sheet pan! Once baked it was a sight to behold, all golden brown and puffed. (See photo at top of post) You could see bits of the cranberries and walnuts peeking out of the crust. I had made a point to have Miss G tap on the loaf before it should have been done, 5 minutes later, and then 5 minutes after that when it was done so that she could hear the difference between almost baked and fully baked.
All in all it was a super fun day and some great bread was made, conversations and laughter shared and new skills developed. We are already talking about another bread baking day in January! You'll want to come back and see what we make.
Happy holidays to you and yours! May your days be merry and bright and full of the smells of bread baking and being eaten with enjoyment!
XOXO Elle

Cranberry-Walnut Bread
from the Apple Pie, Patis, and Pate’ blog
makes one braided loaf, the shaped bread will fit on a half-sheet pan

1 whisked egg, for the egg wash

Knead 5 to 6 minutes – OK to use stand mixer

Knead On a lightly floured surface spread out the dough in a rough rectangle by pushing down on it. Add the cranberries and walnuts.

Gently fold the dough over itself until the cranberries and walnuts are evenly incorporated.

Final Proof 60 to 90 minutes at room temperature while uncovered,
or until almost doubled in size
Preheat the oven to 325 degrees F.

Egg Wash - Glaze the braid with the egg wash

Bake Bake for 50 to 55 minutes at 325ºF, rotating the loaf halfway through baking if necessary. The center of the loaf will register 185ºF to 190ºF when done.