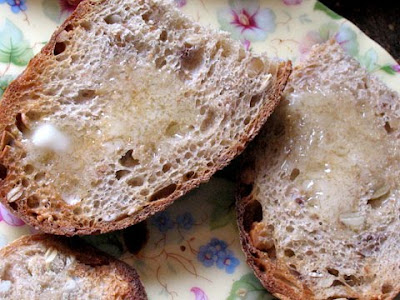 
Although there are dozens of regionally produced sourdough breads available to buy, without too much trouble, making my own means that I can add whatever I like to the dough and not pay a king's ransom for the results. The fact that the Straight Shooter Man recently gifted me with not one, but two...two! freshly milled flours added to the fun. He visited the Bale grist mill in Napa on a photo shoot and bought both the whole wheat bread flour and the spelt flour that they milled on site with old French mill stones.

I started with one of the first Sourdough Bread recipes I used when my starter was brand new last fall. Now that I have a better sense of how to bake bread with a starter, I only used the recipe for a general guide and quickly went down a different path.


The flour bowl contained a mixture of unbleached bread flour, 12-grain flour, whole wheat bread flour and spelt flour. For additions once the kneading was finished I lightly toasted walnuts, pumpkin seeds, and sunflower seeds. Although that looked good, I also toasted a rolled grain mixture I use for muesli. It has barley flakes, triticale flakes, wheat flakes and oat flakes. 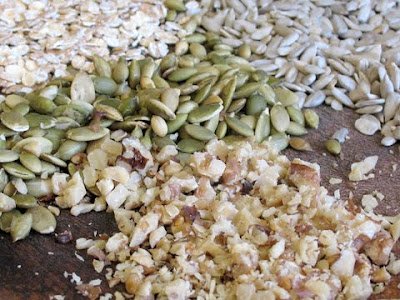 There was no addition in this bread of a sweetener like honey or molasses or brown sugar, nor any butter or milk.
Although it might be too late for this week, I'm sending this over to the host of Yeastspotting, that weekly wonderland of inspiration for yeast lovers, hosted this week by Susan (I think). Do go by and check out all of the wonderful entries. 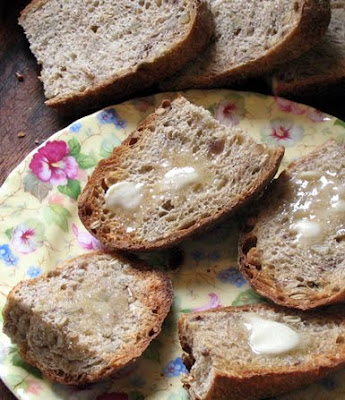 In a large bowl mix the all purpose flour, 12 grain flour, whole wheat flour and spelt flour together to combine.(I used a whisk to whisk them until combined.)
Put the starter, water and 1 cup flour mixture in the bowl of a stand mixer and whisk to make a smooth batter. Use the paddle or dough hook with mixer on a low speed to work in additional 1 1/2 cups flour mixture. If not using dough hook, change to dough hook at this point. Add rest of the flour mixture to the dough, 1/2 cup at a time with the mixer on a low speed. Let the mixer knead the dough for about 5 minutes, or until dough is elastic, or turn the dough out onto a floured board and knead in the rest of the flour then knead for 5 minutes until the dough is elastic.
Let the dough rest 5 minutes, then push down with the palms of your hands to spread it into a rectangle approximately 10 inches by 12 inches.
Mix the seeds, grain flakes and walnuts together. Spread half on the rectangle, leaving an inch uncovered around the edges. Roll up like a jelly roll, then fold the two open ends into the center of the dough roll. Again push down into a rectangle, spread the other half of the seed mixture over it, leaving an inch uncovered on all sides, roll in jelly roll fashion, fold in the ends and knead a minute or two to distribute the seed mixture even more.
Lightly coat a 4-quart mixing bowl with oil and transfer the dough to the oiled bowl. Turn the dough over once so that the top of the dough is lightly coated with oil. Cover the mixing bowl with a loosely applied layer of plastic wrap and allow the dough to rise at room temperature, until it has doubled in bulk, at least 8 hours, preferably overnight.
Press the air out of the risen dough and gently knead it until it is springy again, The dough will have a smooth, flexible 'skin', although some seeds may poke through.
Divide the dough in half. Working with one half at a time, shape the dough into 2 balls, tucking the cut edges of the dough into the center of the balls, and stretching the 'skin' over the surface of the dough balls. Try to do that without tearing the 'skin'. This is hard to do with all the seeds. If a few pop through, don't worry about it.
Put the balls of dough on a baking sheet lined with a silicone pan liner or bakers' parchment. Loosely cover the loaves with plastic wrap and let them rise until they are doubled in size, about 4 hours.
Put a baking sheet on the bottom rack of the oven and put a second rack one position above it. Pour a 1/2 inch layer of water into the baking sheet on the bottom shelf. Preheat the oven to 450 degrees F. Just before putting the loaves in the oven, use a box cutter or a very sharp knife to cut shallow slashes in a cross over the surface of the loaves, about 1/8 inch deep. Bake the loaves until they are well browned and sound hollow when tapped, about 35 minutes. An instant read thermometer inserted into the center of a loaf will register 200 degrees F.
Transfer the baked loaves to a cooling rack and let them cool to room temperature before slicing. 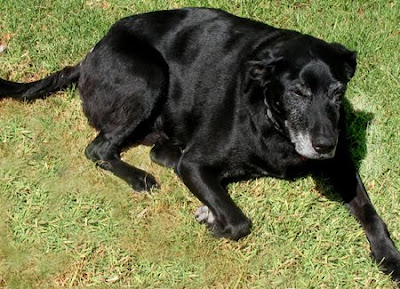 Bakers dog news: Xam had stitches removed on Friday and he is like a young dog again, running around and even chasing his tail! Still has the grey muzzle and eyebrows to let us know the truth, but he has a spring to his step when we take walks that hasn't been there for months. Yay! Thanks for all your good wishes...I know it helped. Hugs, Elle
Posted by Elle at 12:58 PM