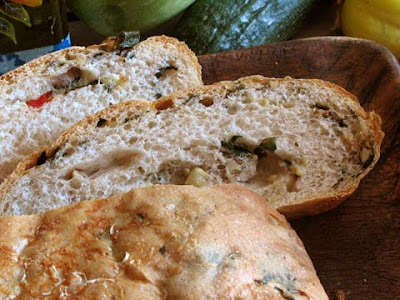 If you have been following my other blog, Feeding My Enthusiasms, you'll know that I have had dental (gum) surgery and have been on soft foods for over a week. It gets old. It is also difficult to get up much enthusiasm for baking a nice, crusty bread when you won't be able to eat it. Doing better, but still mostly eating soft foods. By next week I'll be back to sterner stuff. 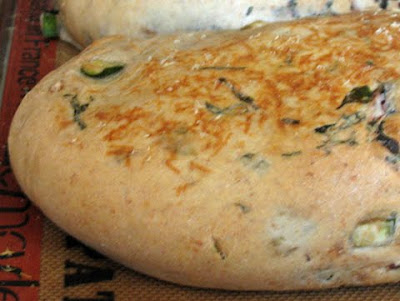 Today I did bake two nice loaves of fresh, fragrant bread because Sweetie really, really deserved some bread and this is the one he requested. He put up most of the signs for a Yard Sale that the P.E.O. chapter I belong to is holding today to raise money for scholarships for women. Over an hour last night and about the same this morning (staring at 6:30 am!) certainly earned him something special from the oven. He followed that up with about 6 hours of tree trimming and then chipping the branches trimmed, with liberal assistance from Straight Shooter from SF.

This bread is also by way of a thank you to Straight Shooter from SF because he returned from a photo shoot to Napa last weekend with some freshly ground wheat bread flour and spelt flour. I used a cup of the whole wheat flour in the bread and as I was kneading it I could really smell the sweetness of fresh grain.

This bread is a variation of the asparagus bread that the Bread Baking Babes made in June. I substituted 1/2 cup cubes, roasted zucchini for the asparagus. I used 1/2 cup fresh Swiss chard (cut in chiffonade, steamed, drained and squeezed dry, then measured) instead of the arugula in the original recipe. I used 1 cup of the freshly milled whole wheat bread flour and three cups of unbleached white bread flour. Because tomatoes are late to ripen but the basil is going gangbusters, I added 1/4 cup minced fresh basil. Zucchini doesn't have the assertive flavor that asparagus does, but the basil not only smells wonderful, but adds great herby taste to the bread. Otherwise the recipe is the same.

This makes a moist, flavorful, chunky bread, full of veggies, nuts and Parmesan. The crumb is soft and fairly tight and the crust is good, although not as good as last time when I used the sourdough starter. I did add steam a couple of times, but didn't open the oven door...already too hot in the house! The loaves are a bit on the flat side, partly because I think I let them rise too long for the second rise and partly because the plethora of veggies makes it hard to have a good 'skin' of dough to hold the loaf higher.
I'm sending this lucious bread over to Yeastspotting, one of the best places to see what other bakers are doing with yeast bread! Check it out!! 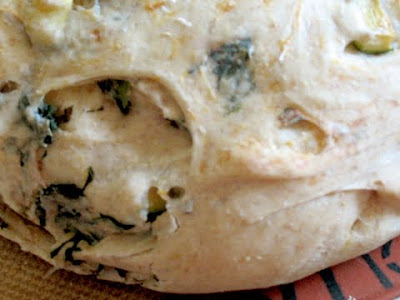 Update on Xam: He had surgery this past Thursday to remove a large mass back to the left of his spine by his tail. A fluid biopsy a few days earlier had shown infection, but not cancer, so we have our fingers crossed...won't hear until Tuesday. He is in good spirits and doesn't seem to have noticed the 30 stitches on his rump! He ate bits of this bread with great gusto! 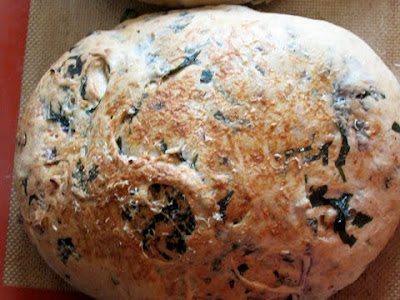 Boil 3/4 liter of water with a pinch of (sea) salt. Clean the asparagus, set two of them aside, cut the rest into 4 pieces. Boil these pieces for 2 minutes in the water, scoop them out (so you can use the water for the rocket as well) and rinse under cold water (to stop them cooking).

Put the rocket in the boiling water for a few seconds (until wilted), drain and rinse under cold water and drain again. Press the water our of the rocket, chop it coarsely and but the asparagus into 1/4 inch (± 1 cm) long pieces, set aside.

Crush the walnuts coarsely and grate the Parmesan.

Measure the flour and yeast in a large bowl, mix in most of the water and knead for a few minutes (on low speed), add the olive oil and knead for 10-12 minutes. Add the salt and knead on medium speed for 5 minutes until very elastic.

Let the dough rest for 10 minutes. Work the asparagus pieces(zucchini pieces), rocket(Swiss chard), walnuts, basil and Parmesan in with care so that they're evenly distributed. The dough should be very supple and elastic, hence the long kneading time. For me the best way to incorporate all the ingredients is to spread the dough out into a large slap, sprinkle all the ingredients on and roll it up. Let it rest for 5-10 minutes, press flat and fold... rest 5-10 minutes press flat and fold. Shape into rounds.

Place the dough in a greased container, cover and let rise for about 2 hrs.

Divide the dough into 2 equal parts.
Make round balls, cover with a tea towel and let rest for 10 minutes.
Flatten the balls and fold into taut breads with slightly tapering ends. Lay one asparagus in lengthwise in the middle of the bread and press in slightly. Sprinkle with wheat flour and cover to rise for 70 minutes or until doubled. Before baking you can sprinkle a little grated cheese on the bread if you like (optional).

Preheat the oven (preferably with stone) to 460ºF.

Place the loaves directly on the stone. Spray with water (or poor some hot water in a metal container on the bottom of the oven that you preheated to create steam)
Lower the temperature after 5 minutes to 400ºF. Open the door after another 10 minutes to let some air in. Repeat twice during baking. (I must admit I forgot about this step)
Bake for 40-45 minutes and cool on a wire rack.
http://notitievanlien.blogspot.com/2009/06/bbbabes-go-seasonal.html June 26th
Posted by Elle at 4:04 PM