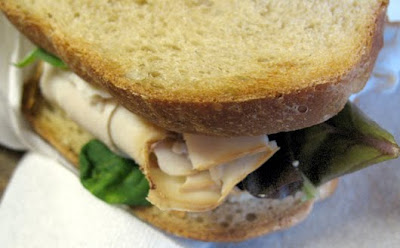 There is something so satisfying about biting into a sandwich made with your own bread. Although my Mom had few choices for grocery store bought bread in the ancient days when I was young, she did try to go with bread that had some substance although white bread was still the norm. Eventually she found that she could buy Trappist Monks bread somewhere and that was good bread, although still white...not a whole grain in sight.

Eventually my Dad began making bread on the weekends so our sandwiches suddenly became worth making and toast was fabulous! He liked white bread, so mostly that's what we had, although sometimes he would add some whole wheat flour.

Not sure if it was the bread of my lack of interest in the fillings, but I spent most of my childhood not liking sandwiches (except for bacon, lettuce and tomato). I would pack soup for lunch in a thermos container, salads in Tupperware later in high school, and little containers of cottage cheese if I could convince my Mom to buy them. For a long time our sandwich wrappers were sheets of wax paper, then wax paper sandwich bags. Plastic didn't show up until I was in late high school or in college and even then it had a flap you tucked in so nothing too messy could be packed. 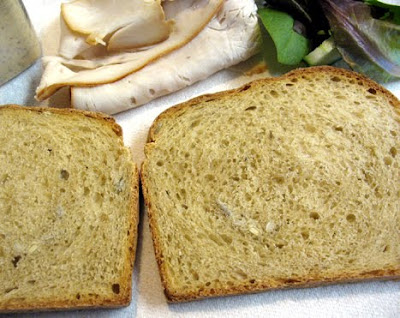 I still choose leftovers over sandwiches most of the time, but with a loaf of home made Oatmeal Sunflower on the counter, I took a sandwich to work this week. Due to lots of visitors I only worked the one day, but that sandwich hit the spot at lunchtime. This bread was made with cooked rolled oats and it has lots of chewiness, sunflower seeds scattered through it, and a nice crust, too, plus sourdough flavor. The oatmeal bread was first sliced from the loaf, toasted, slathered with grainy mustard, stacked with thinly sliced roast turkey, topped with lettuce and another slice of that toasted bread. Yum!

For the loaf I used the second piece of the dough that I also used for a Lemon Marmalade Braid, and the recipe can be found here. Check it out!
Posted by Elle at 6:00 PM