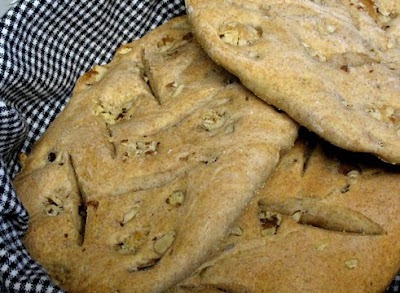 Bread Baking has been low on the list of priorities of late. The last post here was in August and it is already October 5. I've been reading a lot of bread recipes but not baking. Time to change that. Some days the words just don't flow, so if this post seems to need something, believe me I feel that way, too...maybe some salt?

A few months ago I was lucky enough to be in Seattle at the same time that Tanna of My Kitchen in Half Cups was visiting. She kindly asked me to join her when she met with Lynn of Cookie Baker Lynn. Lynn lives in the Seattle area so she knew of great chocolate places as well at a wonderful bread store/cafe'.

One of the fun things to do with bloggers is to exchange goodie boxes. Cookbooks are a fun thing to send and receive. Recently a cookbook found it's way to me from Lynn and I had a great time looking at all the recipes. Today I finally had time to make one of the breads in the book. The book is called Basic Baking: Flavored Breads by Linda Collister. There are dozens of delightful breads. I decided to start with the Bacon and Walnut Fougasses in the Mediterranean Flavors section. Thank you Lynn!

I've never made fougasse before but have long been intrigued by the way that you slash the bread in a sort of herringbone or ladder shape. It is a kind of flatbread, similar to foccacia. I liked that the crust was not too thick or firm and that some crust formed in the slashed areas. 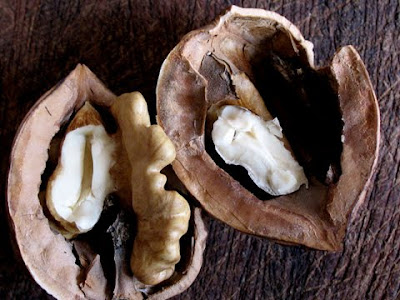 This is the time of year when the walnuts are falling fromt he tree and making a loud thunk when they hit our deck. Walnuts are a great fall ingredient and since the gougasses are flat, the walnuts get toasted while baking. The walnut flavor was just strong enough, but the bacon flavor was faint in the four I made with bacon. It's possible that it would be better with a different kind of bacon than the one I found in the fridge. 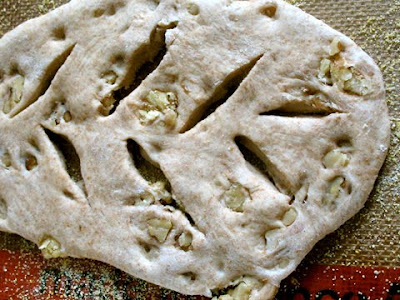 “These attractive, oval, individual loves come from Provence where, these days, they are made plain or flavored with olives, herbs, charcuterie, or even candied fruit. Use top-quality bacon…”

I changed the recipe a bit by using whole wheat flour for some of the flour and by using dry yeast instead of cake yeast. If you wish to you cake yeast, e-mail me and I’ll send you the recipe for using compressed cake yeast.

Heat the oil in a skillet, add the bacon, and saute’ until golden and crisp, but not hard. Drain on paper towels, then combine well with the walnuts. (If your bacon is very fatty, you can probably skip the extra oil in the pan…I did)

Put the flours in a large bowl, mix well. Remove one cup and set aside. Mix the salt into the larger bowl of flour, then set that aside, too.

Sprinkle the dry yeast over ¼ cup of the lukewarm water in a small bowl. Let sit 10 minutes to hydrate and proof.

Make a well in the center of the flour/salt mixture. Into the well pour the yeast mixture, the rest of the lukewarm water (1 cup), the beaten egg and the olive oil. Gradually work in the flour to make a soft but not sticky dough. Use additional flour, 1 tablespoon at a time, from the reserved one cup to make the dough the right consistency to knead.

Turn the dough out onto a lightly floured work surface and knead thoroughly for 10 minutes, adding additional flour from the reserved flour if needed. When finished dough will feel fairly smooth, very elastic, and silky.

Place the dough in a lightly oiled bowl and turn it over so the entire surface is lightly coated with oil.

Cover with a damp cloth and let rise at room temperature until doubled in size – about 1 ½ hours. Punch down the dough, then turn out onto a lightly floured surface. Knead in the bacon and nuts until evenly distributed.

Weigh the dough and divide into 8 equal parts. 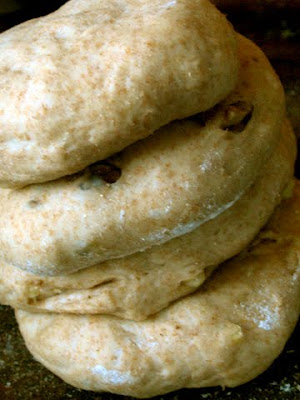 Using a rolling pin, roll each piece into an oval about 8 ½ by 5 by ½ inch. With a sharp knife, cut about 8 slits in a herringbone pattern in each oval. Arrange them, spaced apart, on the baking trays.

Lightly cover the baking trays with a damp cloth and let rise at cool to normal room temperature until doubled in size – about 45 minutes. 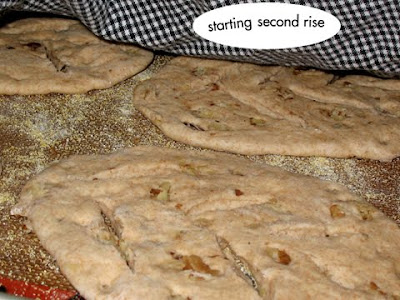 Preheat oven to 400 degrees F. Uncover the fougasses and lightly brush with oil. Bake for about 15 – 20 minutes until golden brown. Cool on a wire rack.

I made half of these with only the walnuts because I thought we were out of bacon, but later discovered that we had some bacon, so the second batch of 4 were made with the bacon. Although they were fine with just walnuts, the bacon added an extra dimension. Next time I would use a different kind of bacon...something drier and more intensely flavored. If you want to omit the bacon, I would add some herbs to add additional flavor…perhaps some minced fresh rosemary or parsley.

These are nice because each fougasse is a good size for one person and the slashed make they interesting visually, too. I didn’t pull at the rolls once the slashes were made to open up the holes for the first batch without the bacon, so they closed up a bit during the second rise. Sweetie liked them that way, but I like crust so I made the spaced larger for the bacon ones which gave a better crustiness around the slashes in those loaves. You can make them either way depending on how much crust you like. You can also omit the whole wheat flour and use only white flour as the original recipe suggests. I like the additional grain flavor that the whole wheat flour adds, but all white flour would be more refined.
These are fun loaves to make due to the visual interest, the nice crust and chewiness. They make a nice addition to the bread basket and are especially nice warm, with some good butter. They taste lovely toasted, too.
I've been missing the weekly wonderful event that is Yeastspotting at Susan's Wild Yeast...no time to even go there and drool over the bread being baked by the fantastic bakers featured there...so it's nice to have an entry again...and time to bake bread. Here is the URL for Susan's blog :http://www.wildyeastblog.com/
Posted by Elle at 12:59 PM