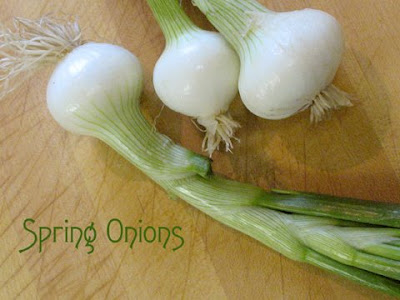 In years past I’ve noticed the bunches of spring onions for sale at the market and passed them by. They look a lot like green onions or scallions, but are more expensive. This year I decided to try a bunch in some filled bread.

Surely these onions, looking like a cross between scallions, leeks, and regular white large onions, would be a taste of spring. They really are only available during the spring. Left in the ground I suspect that they become prosaic white onions.

To go with the spring onions, I used some fresh baby spinach, another harbinger of spring. The leaves are bright green and tender, needing only a quick chop and brief steaming to break down the cell walls, releasing the excess moisture and wilting them slightly. I dried the steamed spinach with paper towels because extra moisture wouldn’t be a great idea in baked buns.

The final part of the filling is shredded jack and cheddar cheese. You could also use some feta for a tangier combo. 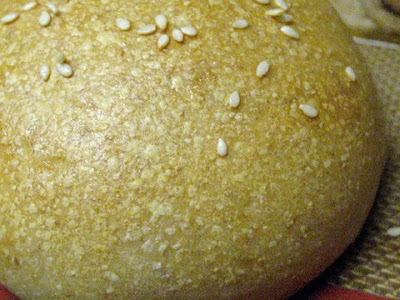 The bread dough is one I put together using a King Arthur Flour recipe for Stuffing Buns for proportions. I changed so much of the recipe that it is barely based on theirs. I used my whole wheat sourdough starter and a little reconstituted active dry yeast, too. Some potato starch adds suppleness. Look at what a great crust it has!

Some Meyer lemon flavored olive oil goes well with the onions and spinach. A little dried rosemary gives additiona flavor. An egg and some milk add richness, more whole wheat flour and unbleached bread flour give the rolls their body.
This dough is a little sticky, but a pleasure to work with and easy to form into the filled buns. Once the dough had finished it’s first rise, I punched it down, turned it out onto a lightly floured board, kneaded it a few times to release any extra trapped gas, then used my bench scraper to cut it into eight pieces. If you want smaller buns, you could probably make ten or twelve buns.
The nice thing about having eight was that a tablespoon of the cheese mixture went into each one and that is exactly a cup. A little cheese leaked out of a few of the rolls, but that's OK. Each bit had a nice cheesiness to go with the spinach and onion flavors. 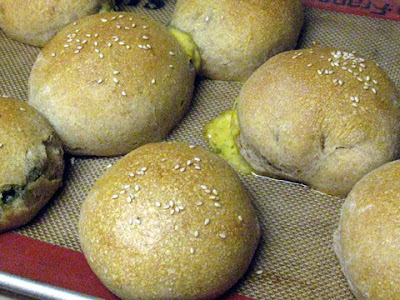 These are great little buns for lunch or brunch or even a picnic, although the cheese won’t be melty as it is when served warm from the oven. I'm going to send them over to Cinzia at Cindystar for Bread Baking Day #19...Spring Country Bread. She invited us to have a virtual picnic. These rolls should find a welcome place in a picnic basket. 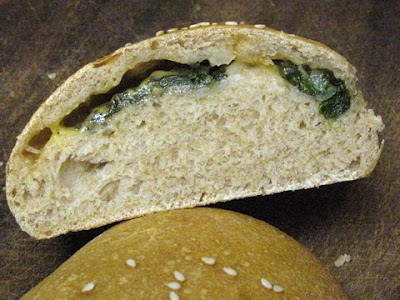 1/3 cup warm water
¼ teaspoon active dry yeast
1 cup sourdough starter, whole wheat if you have it
2 tablespoons olive oil – I used Meyer lemon flavored, but good quality plain olive oil is fine
1 egg, slightly beaten
1/3 cup milk at room temperature
1 cup whole wheat flour
¼ cup potato starch
2 cups unbleached bread flour, divided
½ teaspoon dried rosemary, broken into very small pieces
1 teaspoon salt
1 cup finely shredded cheese – either one kind or a mixture
Spring Onion and Spinach Filling Mixture – at end of recipe.
In a small bowl, mix together the warm water and active dry yeast. Let stand 10 minutes to proof. Set aside.
In the bowl of a stand mixer, combine the sourdough starter, proofed yeast, olive oil, egg, and milk.
In another bowl or a measuring cup, combine the whole wheat flour, potato starch, and one cup of the unbleached bread flour.
With the dough hook in place on the mixer, slowly add about half of the flour mixture. Add the salt and mix. Continue to add the remainder of the flour mixture. Then begin adding the rest of the unbleached flour, letting the dough absorb the added flour a little at a time. Knead with the mixer for 4-5 minutes until the dough is supple and silky. You may still have some of the unbleached flour not used.
Turn the dough out onto a lightly floured surface. If it seems too sticky, knead in a little more flour. Gather into a ball. Place in a lightly oiled bowl or rising container, turn dough ball over to oil all sides. Cover lightly with plastic wrap or a towel and let rise until double in bulk, about 1 ½ hours.
Punch dough down and turn out onto a lightly floured surface. Knead a few times to release any trapped gas. Divide dough into 8, 10, or 12 pieces, depending on how many buns you want and how big.
Take each piece of dough and spread it into a circle roughly 5 inches in diameter. Into the center place 1 tablespoon shredded cheese. Top with a generous teaspoon or a little more of the spring onion mixture. 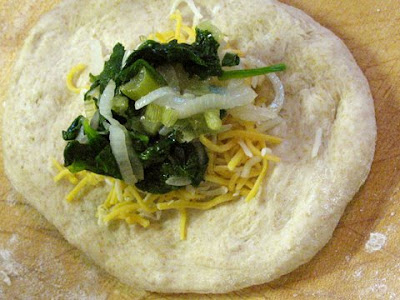 Gather the edges together to make a ball, pinching to seal. Place sealed side down on a greased baking sheet or silicon mat which has been placed in a baking sheet. Repeat until all dough has been filled.
Place a towel over the pan and let rise until doubled in bulk, about 1 to 1 ½ hours.
Optional: Paint tops of rolls with an egg wash (1 egg beaten with 1 tablespoon water) and sprinkle with sesame seeds right before putting in the oven.

Bake in a preheated 400 degree oven for xx minutes, until rolls are browned. (Rolls can be brushed with melted butter once removed from oven if you prefer a soft top and have not done the egg wash.)
Let cool slightly on a cooling rack. Serve warm or at room temperature.
Spring Onion and Spinach Filling Mixture
1 cup thinly sliced spring onions, root end removed. Use a little of the stem part, but not as much of the greens as you might with scallions
2 tablespoons olive oil
2 ½ cups packed chopped fresh spinach, briefly steamed and then drained
In a heated sauté pan place the olive oil and let it heat a minute. Add the onions and stir to coat with the oil. Stir over high heat for another minute, then cover and reduce heat to lowest setting. Let onions and oil sweat gently for 15 minutes, then uncover and turn off the heat. Any remaining extra moisture will evaporate as the mixture cools. Once cooled, add the steamed and drained spinach and stir to combine.
Posted by Elle at 9:29 PM