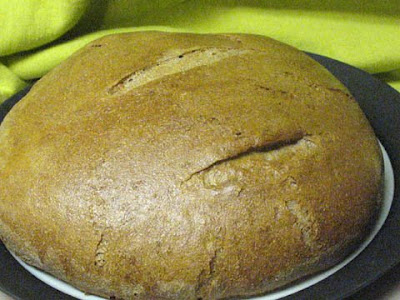 For the initial post in this blog devoted to baking I thought I'd tell about a nice sourdough rye bread that a baked a while ago. Not sure why I never posted about it on my other blog, Feeding My Enthusiasms, but it never happened.

So you may be wondering why I don't post it there now. Why is another blog needed? Well, I kept getting comments that I should rename my blog Feeding My Bread Enthusiasms and that I was doing a lot of bread posts, so it seemed like a good idea.

I'll still post to Feeding My Enthusiasms, but will concentrate on baking here, especially bread baking.

Last fall I created a local wild yeast sourdough starter using the yeast collected on the skins of some grapes grown down the hill where I live here in Northern California. Some more yeasts from the air were collected as the starter became more and more sour over time. It is a very specific, local, delicious starter. At some point I used some of the original starter which I named Sukey, to start a whole wheat starter called Polly. They are both still going strong months later and have opened up a whole new world for me of freshly baked bread. 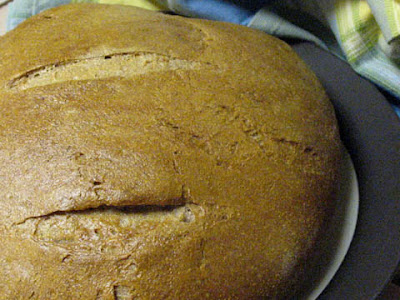 Becoming familiar with different flours has been part of the fun. Rye has a distinctive and fairly strong taste, especially if you use dark rye flour as I did for this bread.

For some reason, the cool, rainy weather inspired me to make some rye bread. A slice with a steamy bowl of soup is so comforting. I started by looking at recipes online and by spreading out at least half a dozen cookbooks that had rye bread recipes so that I could explore the world of rye breads.

I wanted to try making a bread with a sponge and since rye goes so well with a sour taste, this seemed like the one to try a sponge with. I guessed on the proportions…no actual recipe to credit here, but I had looked at about a dozen different rye bread recipes before starting…amazing how different they are, too. Some had more salt, some had more rye flour, some had cocoa or molasses, some had a larger proportion of bread flour, some had oil, butter, and/or milk added.

The Swedish versions had orange zest, too. Obviously rye bread is a delightful canvas for creativity. The sourdough starter added it’s own flavor. It also kept it fresh longer. If you don’t have a starter, make it anyway…the recipe has directions for making it with dry yeast from the store. You’ll still get a nice, sour rye flavor from the sponge. 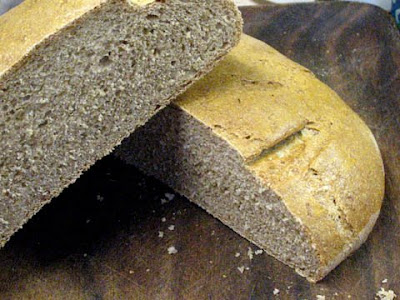 This bread benefits from a number of risings. The sour flavor becomes stronger and the crumb becomes fine. If you like caraway seeds in your rye bread, by all means knead some in during the shaping, or sprinkle some on the egg wash. If you are still undecided about making rye bread, be assured that this one makes excellent toast, too. Isn’t that reason enough?

Rye and Whole Wheat Round

Sponge: In a large bowl, combine the flours and salt. Add the sourdough starter and the water and stir to completely combine. (If not sourdough starter is available, sprinkle 2 teaspoons active dry yeast over ½ cup warm (100 – 110 degrees F) water. Stir and let sit 10 minutes, then add to the flours. Adjust the water to an additional 1 ½ cups.) Cover with plastic wrap, leaving a vent, and set in a warm place until doubled in bulk, about 1 ½ to 2 hours.

Place kneaded dough into an oiled bowl that is large enough to hold twice the amount. Turn dough over to coat both sides with oil. Place plastic wrap over dough, leaving a vent, and set in a warm place to rise until double in bulk, about another 2 hours.

Turn out onto a floured surface and knead a few minutes to release any large gas bubbles. Shape into a ball, pulling dough under as you shape. Place on parchment paper, smooth side up, cover with a cloth or plastic wrap and let rise until double in bulk, about an hour.

With a single edge razor or very sharp knife, cut a few slashed in the loaf. Paint loaf with a mixture of one egg yolk and 1 tablespoon milk.

Place in preheated 350 degree F. oven and bake for 20 minutes. Remove from oven and paint again with the egg wash. Return to the oven and bake another 25 to 30 minutes, or until crust is deep golden brown and loaf sound hollow when tapped.

Let cool at least 15 minutes before slicing…longer is better if you can resist the wonderful aroma of fresh bread.

Makes one large loaf.
Posted by Elle at 9:04 PM