Pain Francese with the Babes 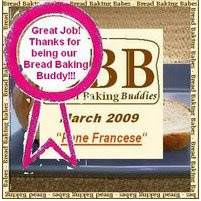 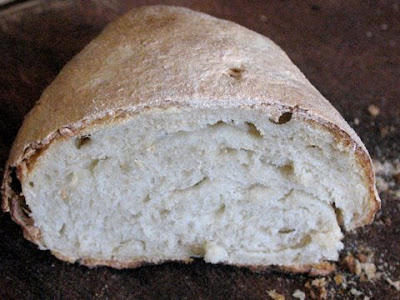 You start with a chef. You might think that means someone wearing a tall white hat, but actually its the term for a small piece of dough from a previous baking session.

Since I didn't have a chef, I made one with some sourdough starter, so that added to the time necessary to make this bread. It has a number of stages, so it takes a couple of days. The good news is that the flavors become more complex with all that time.

My loaf formed a wonderful crust, a fine crumb, and deep flavor considering that it is mostly yeast, flour and water. Have not tried it toasted yet, but I'll bet it makes nice toast. Top Gun tried it for lunch as part of a sandwich and gave it thumbs up. 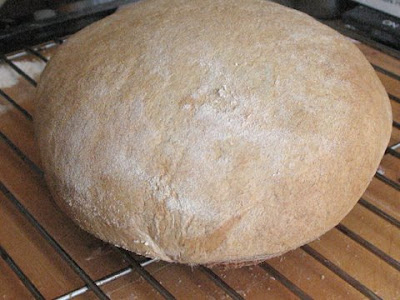 Thanks to the Bread Baking Babes for choosing this recipe...I now have a chef in my fridge to use for some future baking session!

Check out the BBB's and the recipe at Sara' blog at I Like to Cook http://iliketocook.blogspot.com/search/label/Bread%20Baking%20Babes
or by clicking on the recipe link at the top left of this blog.

The Bread Baker's Dog himself is not one to give kisses very often, but after eating some of this bread he gave me a simple kiss. (Sorry, no photo...he was too quick).

"Refresh" the levain by placing it in a medium-sized bowl, chopping it into small pieces, and adding the water and 1/2 cup of the flour, stirring till smooth. Add the remaining flour gradually to create a stiff dough. Knead the dough for several minutes, then return it to the bowl, cover it with a damp cloth, and let it rise for 3 to 5 hours, till it doubles in size. Punch down the risen levain, and reserve 1/4 cup as your next chef. (Let the piece ferment at room temperature for 3 hours, then wrap it in plastic and store it in the fridge. It'll develop a hard crust; that's OK.)

Chop the levain into small pieces, 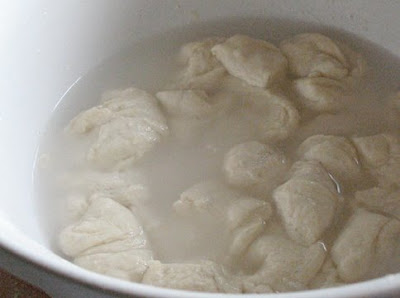 and mix them with the water, stirring till they begin to dissolve. 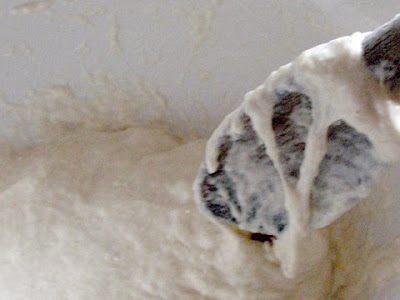 Add the salt, then 1 1/2 cups of the flour. Turn the dough onto a lightly floured or lightly greased work surface, and knead until the dough is smooth and satiny, adding only enough additional flour to keep the dough from sticking unbearably. Return the dough to the bowl, cover it with a damp cloth, and let it rise in a warm place for 8 to 10 hours.

Shaping: Cut the dough into 2 pieces, and shape each piece into a round or oval. Transfer the loaves to a lightly greased or parchment-lined baking sheet, or to a floured banneton; cover with a heavily floured cloth, and allow them to rise for 2 to 3 hours, or until they're almost doubled in bulk.

Don't slash or glaze the loaves. Bake the bread in a preheated 450°F oven for 35 to 40 minutes, or until they're a deep, golden brown. Yield: 2 loaves.

This is what the bottom of the loaf looked like after it was baked. I baked it on a Silpat mat...wonder if that caused the interesting crust? The top crust was much more floury looking. 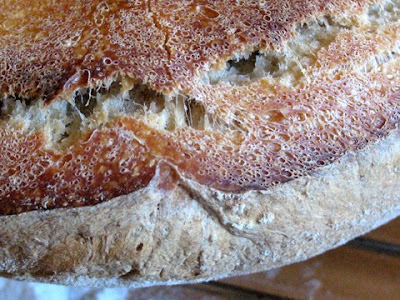